Chapter 4 endnote 50, from How Emotions are Made: The Secret Life of the Brain by Lisa Feldman Barrett.
Some context is:

...these regions predict that your heart rate should increase and your blood vessels should dilate, for instance, in preparation to run. A pounding heart and surging blood would cause interoceptive sensations, so your brain must predict those sensations as well.

The brain's control of the body, sent as body-budgeting predictions, and interoceptive predictions come from the same columns of neurons and are related information. (They may even be exactly the same pattern of neural firing, just arriving at different places.) To the neurons in subcortical regions and in the spinal cord, the information is a body-budgeting prediction to the body (Figure B, below), whereas to the sensory regions, it’s a sensory prediction (Figure D). This arrangement is sometimes called corollary discharge or sending efference copies.

Body-budgeting regions send a variety of efference copies to motor cortex (Figure C) and to other sensory cortices (Figure D).

Key body-budgeting regions (in blue) that provide cortical control the body’s internal systems. Primary motor cortex is depicted in red, and primary sensory regions are in yellow. For simplicity, only primary visual, interoceptive and somatosensory cortices are shown; subcortical regions are not shown. 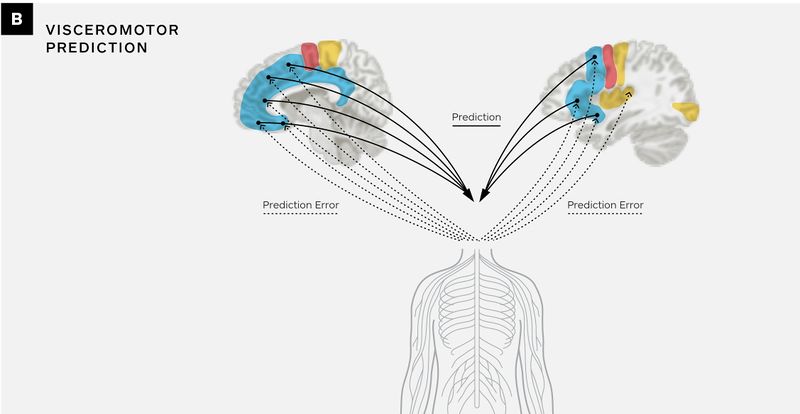 The body-budgeting neurons in the blue regions initiate body-budgeting predictions to the amygdala, ventral striatum, hypothalamus and brainstem nuclei (the parabrachial nucleus, periaqueductal grey, and the nucleus of the solitary tract) to control the autonomic nervous system, the immune system, and the endocrine system (solid lines).[2][3] My hypothesis is that these regions of the brain, which are responsible for keeping the body's budget in balance, in conjunction with the hippocampus and the cerebellum, are ‘driving’ predictions in the brain.[2] The incoming sensory inputs from the body are carried along the vagus nerve and small diameter C and Aδ fibers to the cortex; these are prediction errors, which are learning signals that update predictions (dotted lines)