During surgery, [neurologist Helen] Mayberg works with a team of neurosurgeons who drill small holes in the skull and sink electrodes into a key predictive area in the patient’s interoceptive network. 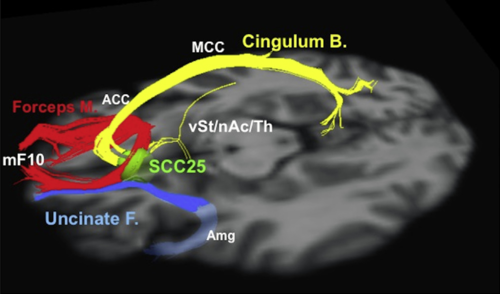 Specifically, the electrodes are placed into bundles of axons that connect a specific body-budgeting region—the subgenual anterior cingulate cortex, or sACC—to other regions within the interoceptive network, as well as to other intrinsic networks.[1][2] Mayberg stimulates a spot where three large tracts of axons intersect (forceps minor, which connects the sACC to vmPFC; uncinate fasciculus, which connects sACC to amygdala and anterior insula; and, the cingulum bundle, which connects sACC with the rest of the cingulate cortex). Patients remain awake during the surgery so that Mayberg can ask them how they are feeling once the electrodes are turned on and bursts of electricity stimulate the axons.