[Neurologist Helen] Mayberg’s remarkable work might represent the first time in scientific history that direct stimulation of the human brain has consistently changed people’s affective feelings, potentially leading to new treatments for mental illness. [...] The neurons stimulated by Mayberg are not specific for affect, however.

During depression, the subgenual anterior cingulate cortex (sACC) is hyperactive, potentially because of poor management of the body budget. Long-term brain stimulation (for intractable depression) decreases sACC activity to more normal levels.[1][2] Mayberg is basically tuning budget predictions that the sACC sends to the body, as well as the interoceptive predictions that drive interoceptive sensations and affect.[3][4] I should also point out that a hyperactive sACC is not specific to intractable depression — we also see it in anxiety.

Even with all this evidence, I’m still not sure we can claim that the body-budgeting limbic regions “compute” affect. Why? Because their neurons are not specific for affect. They continuously send body-budgeting predictions, as well as sensory predictions, and they are clearly important to affect, since the neurons in these areas increase in activity as people report strong changes in affective feelings. But these regions are not exclusively designed for affect.

Here are just a couple of examples to make my point. 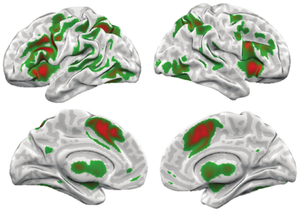 Hot spots in the human brain

Two other body-budgeting regions (the anterior insula and the anterior mid cingulate cortex) are “hot spots” that coordinate activity across several intrinsic brain networks. They show a consistent increase in activity in almost 6,000 brain imaging experiments spanning dozens of different psychological domains, many of which had nothing explicitly to do with affect.[7]