Chapter 6 endnote 5, from How Emotions are Made: The Secret Life of the Brain by Lisa Feldman Barrett.
Some context is:

Many papers use faces as the textbook example for explaining concept formation, because the visual system has been well-studied and so is better understood than most other sensory systems, and because humans are experts at seeing faces in sensory inputs.

Something that appears to be universal from birth, such as face perception, can in fact be learned. We humans learn from each other so rapidly that a learned behavior is easily mistaken for inborn behavior.

As a famous example, look at the figure below. The horizontal line on the top appears shorter than the one on the bottom, but the two are the same length. 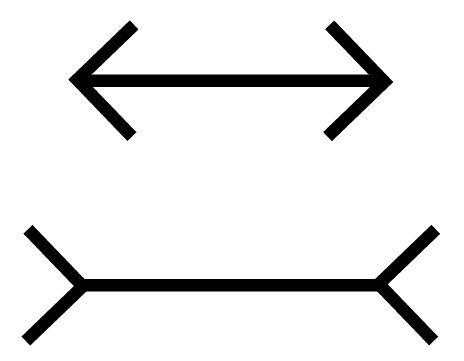 For many years, scientists believed that this illusion was the result of inborn wiring in the human visual system: that all people perceived these lines in the same way. But in fact, the illusion appears to be learned. Corners are extremely uncommon in nature. They are largely human creations found in houses and boxes and so forth. Back in the 1970s, anthropologists discovered that members of the Zulu tribe in Southern Africa see the horizontal lines as equal length. Zulus also show no depth perception, leading some scientists to suspect that the illusion results as your visual system gets “tuned” by rectilinear objects like buildings and streets. Zulu villages have no objects with sharp angles that would provide this training.

Since then, other scientists have proposed other learning mechanisms to account for the cultural differences.[1][2]